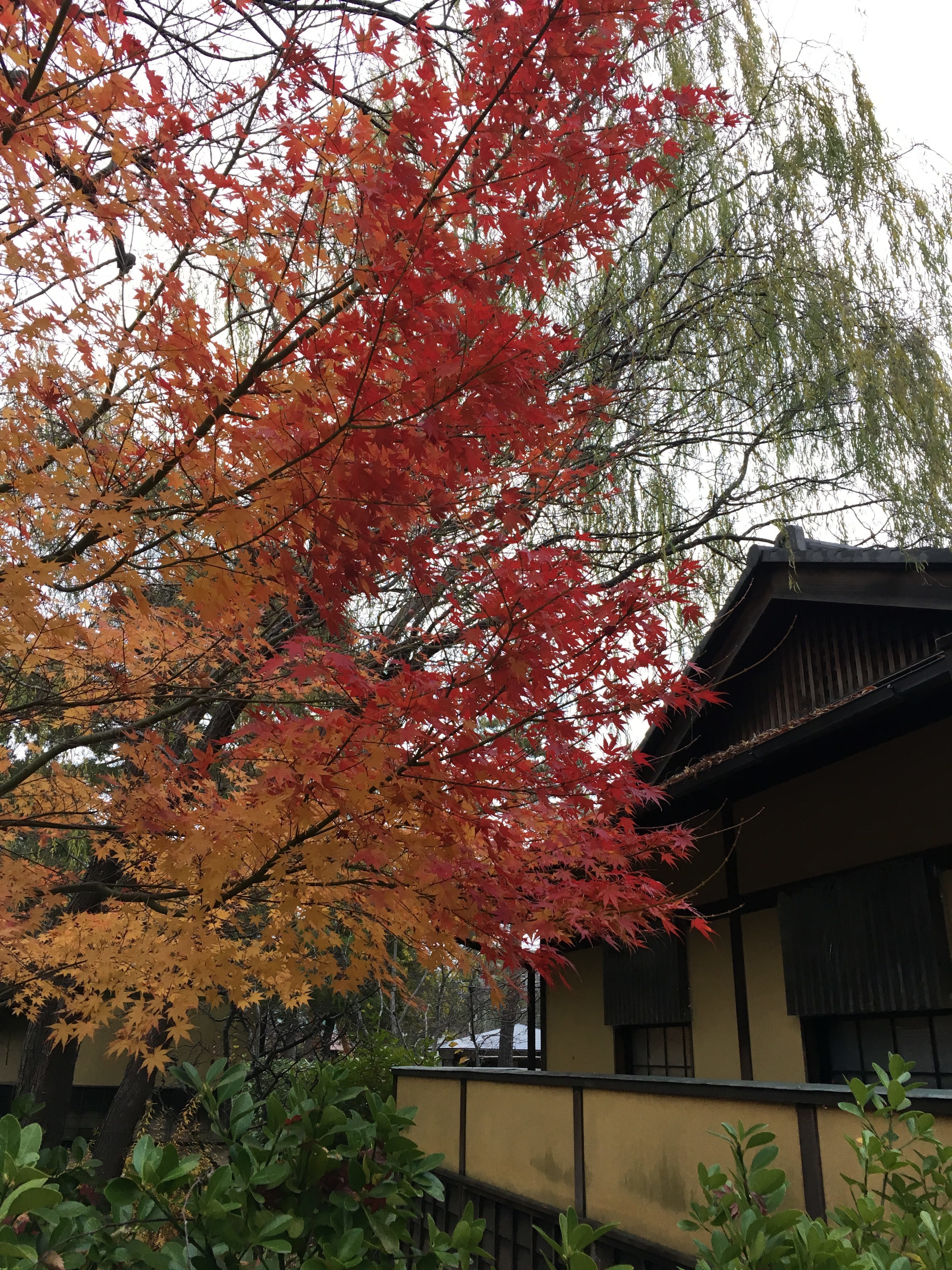 We are now heading in to the shorter days of Autumn. Friday the 23rd is the Autumn Equinox. In Japanese micro season it is known as Shūbun. This season is broken into three parts.

The equinoxes are a special time for Buddhists they believe that this is when the worlds between the living and dead are at their thinnest, thus at this time people pay respects to the deceased .

This is also part of the silver week holiday in Japan starting with Respect the aged day  and finishing on equinox day.

Buddhists call Autumn Equinox O-Higan or Aki no Higan, and it is tradition to make ohagi at the time a type of Japanese wagashi (sweet) Ohagi おはぎ is named after the Japanese clover bush and these sweets are sometimes also taken to ancestors graves at this time as offerings. They are really delicious and so easy and fun to make. 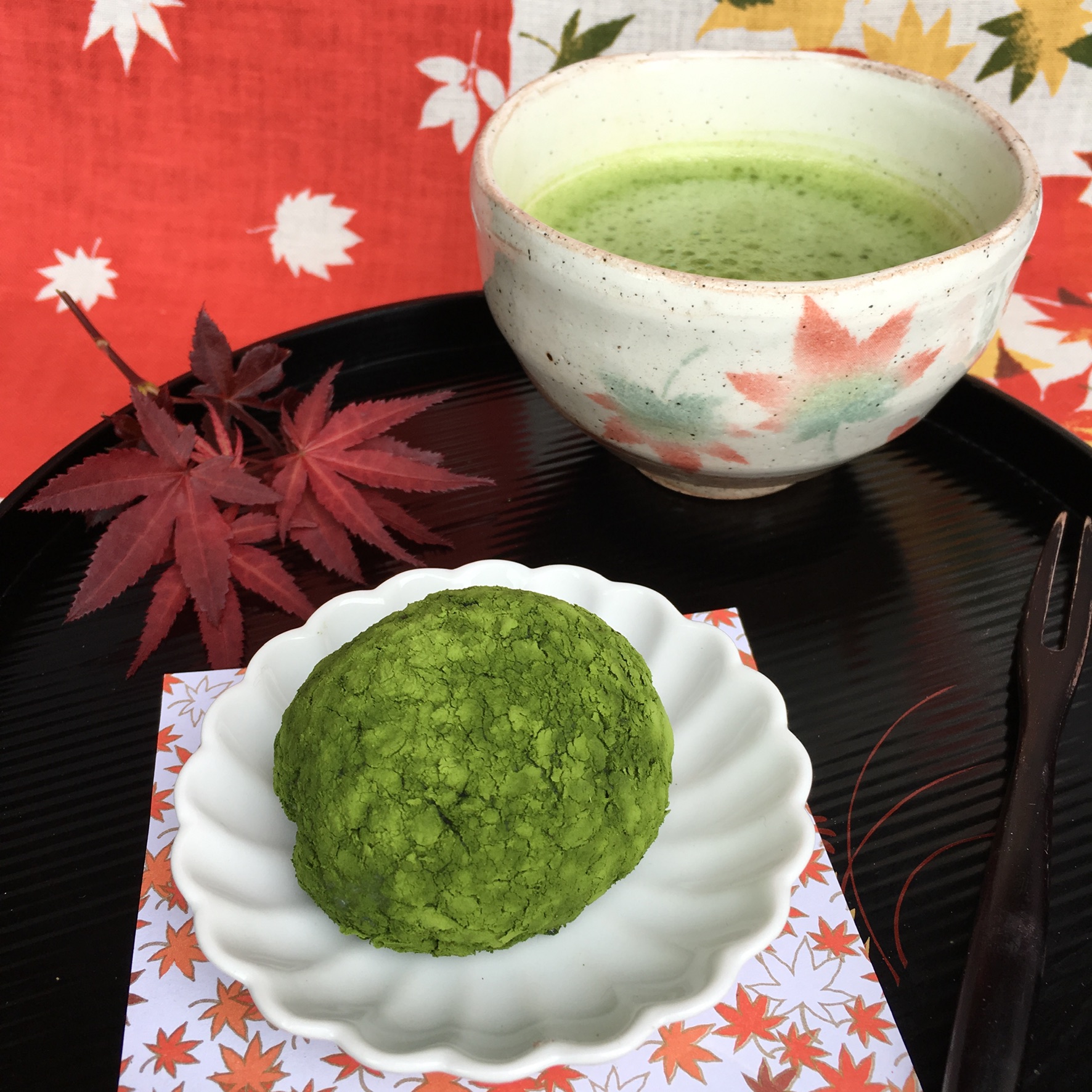 To celebrate why don’t you try to make them. They are made with sweet half pounded ( hangoroshi ) Mochi rice with an anko filling and rolled in various toppings like kinako and ground sesame. You can also do a reverse one where the rice is the filling and the anko is on the outside. You can either buy chunky bean paste called Tsubuan in packets at Asian grocery store or make your own. 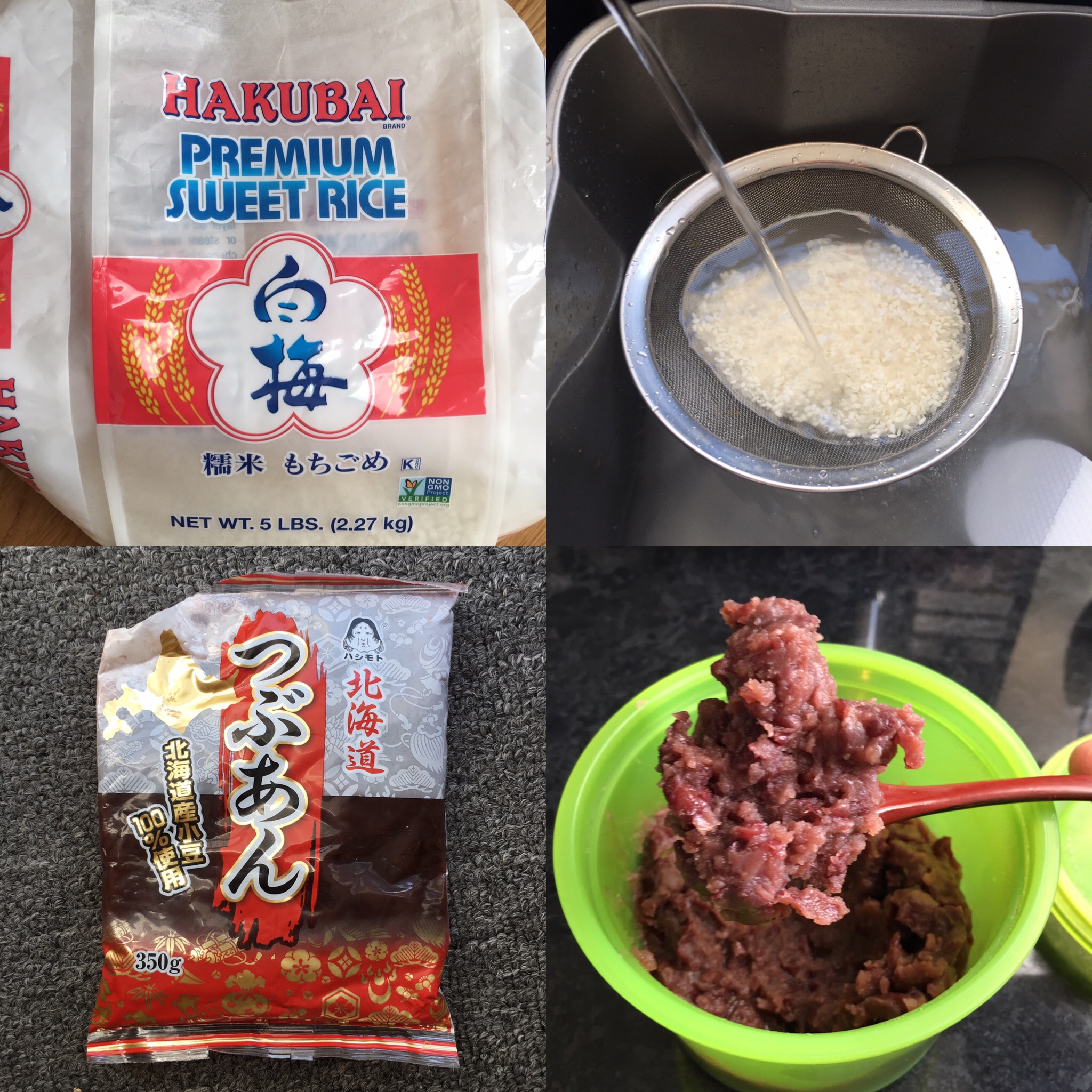 The above shows Mochi rice and bought and homemade tsubuan.

You will need 1 rice cooker cup of sushi rice and 1 cup Mochi rice (Mochimai). First give the rice a good rinse changing the water until in runs clean. Soak your rice in four cups of water over night and then cook in your rice cooker or pan. This does make a lot of ohagi so you can either freeze them or just use half the amounts 1/2 cup sushi rice 1/2 cup Mochi rice and two cups of water. Through experience if your rolling your ohagi in toppings do this after you have defrosted them.

When the rice is done mash your rice but not fully so you still have some grain and leave to cool covered with a cloth so it doesn’t dry out. Divide into balls and flatten out. It is advisable to use plastic wrap but if you don’t want to just have damp hands and a wet clean cloth to hand. In the middle of each flattened ball add a ball of anko and then fold the rice over the anko to make a sealed ball. Carry on making until all are done. 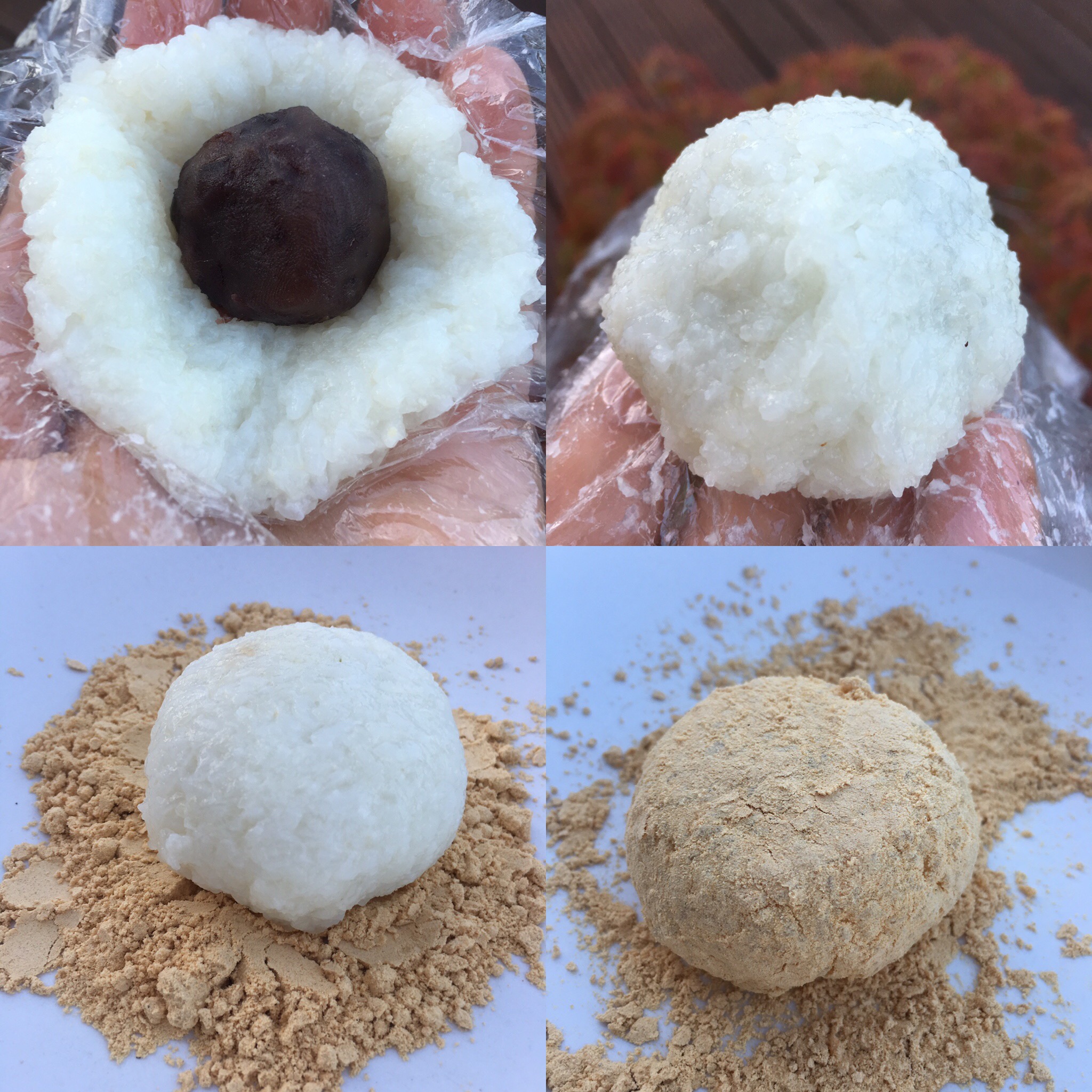 If you want to make inverted ohagi make small balls of rice and add this to the middle of larger flattened balls of tsubuan. 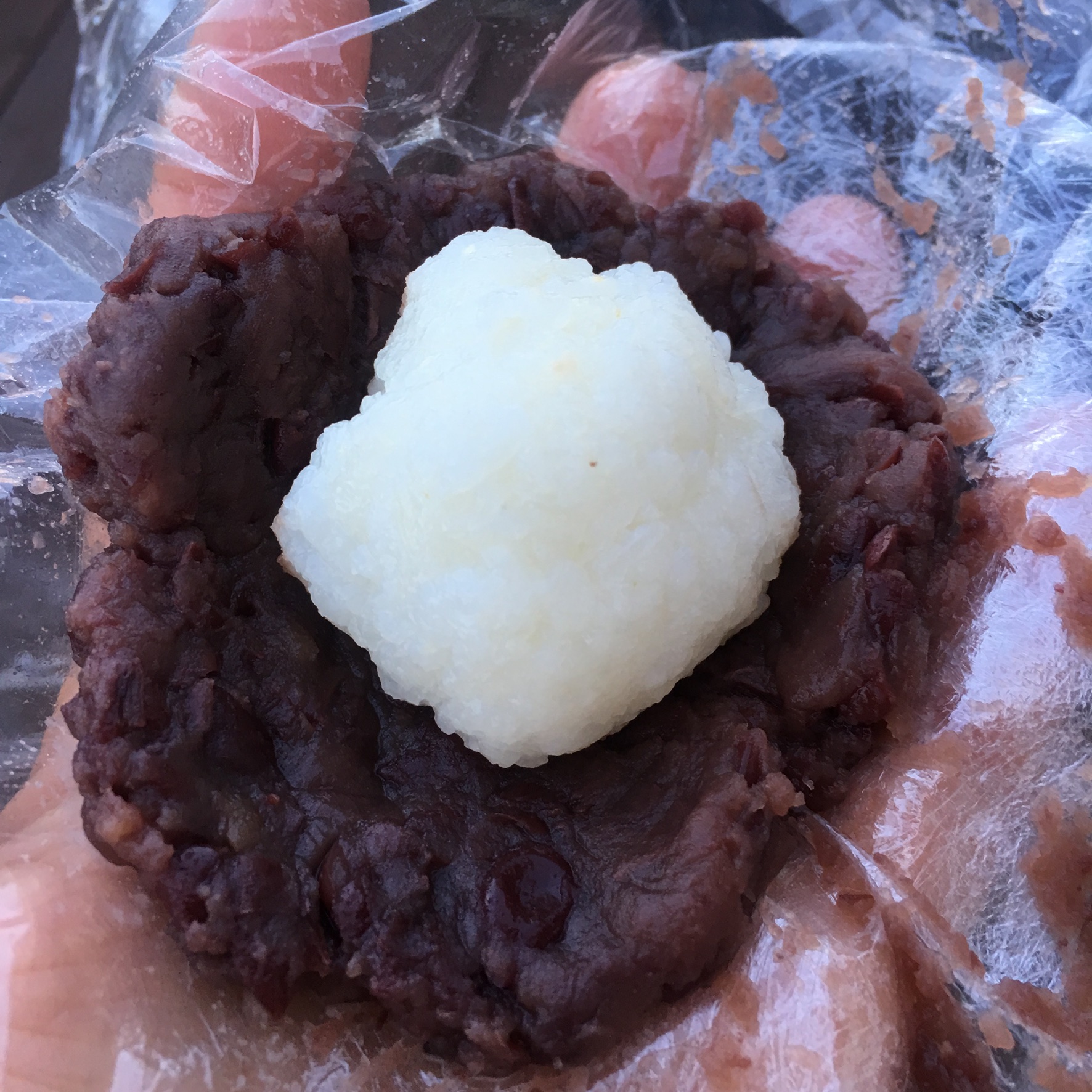 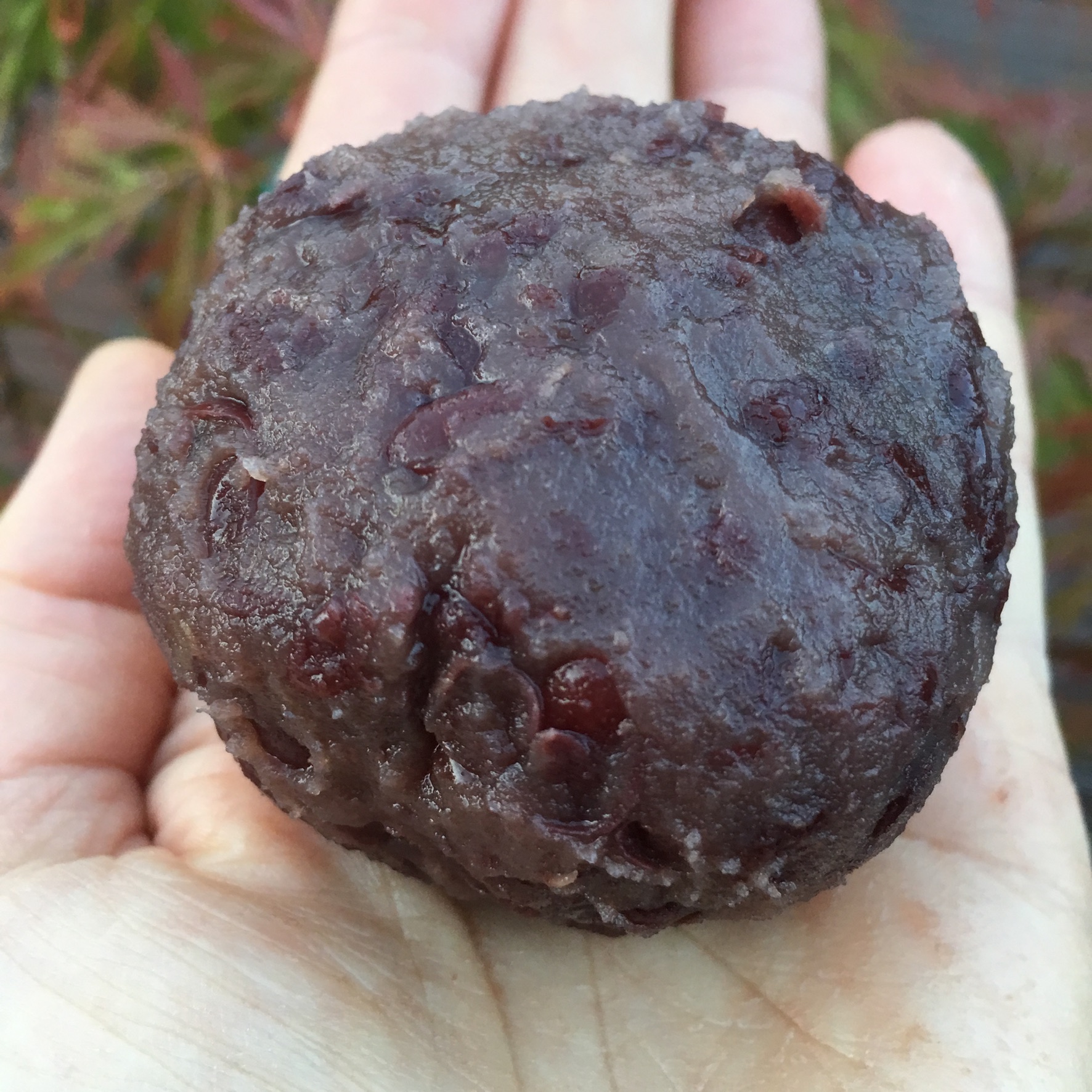 Now choose what you would like to roll your ohagi in . Powdered black sesame ( kurogoma ), kinako ( soybean flour ), sesame seeds mixed with sugar or maybe matcha. 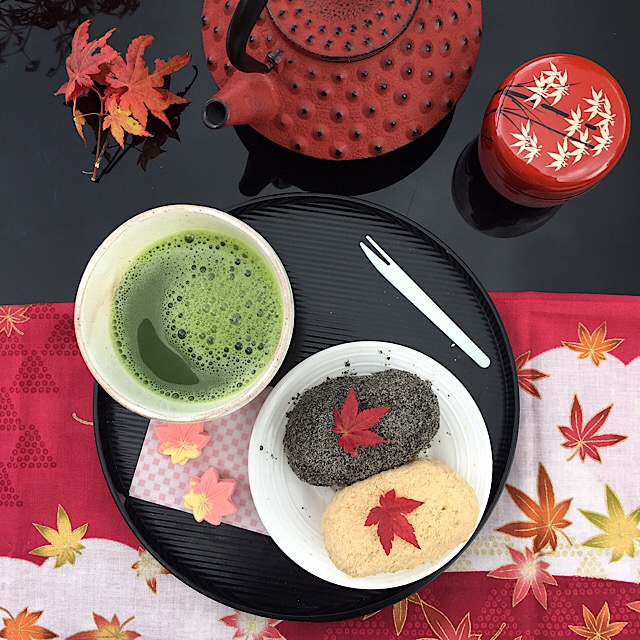 How about making Kurumi which is powdered walnuts with sugar. The balls of sticky rice become easier to mould into balls after they have been rolled in the topping. 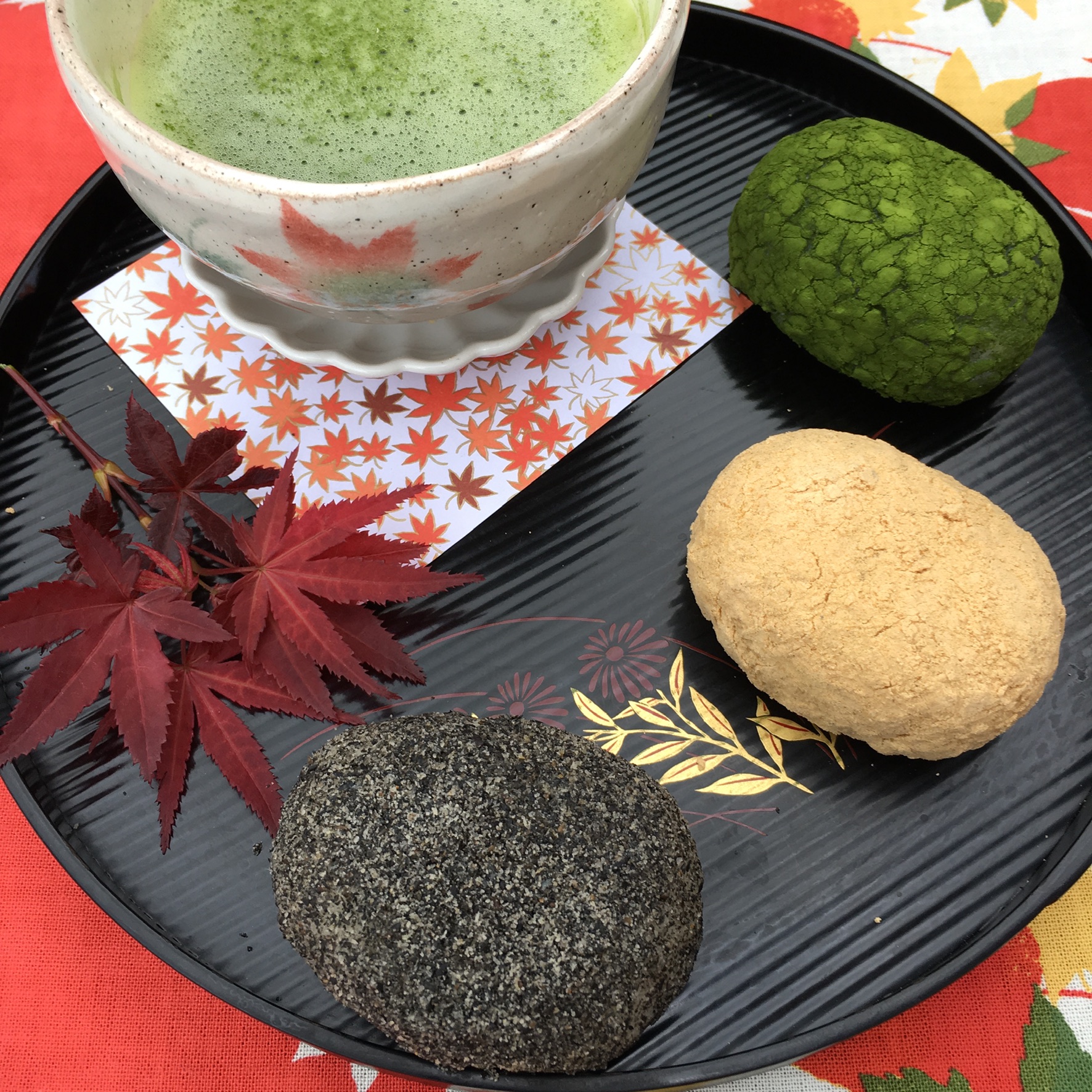 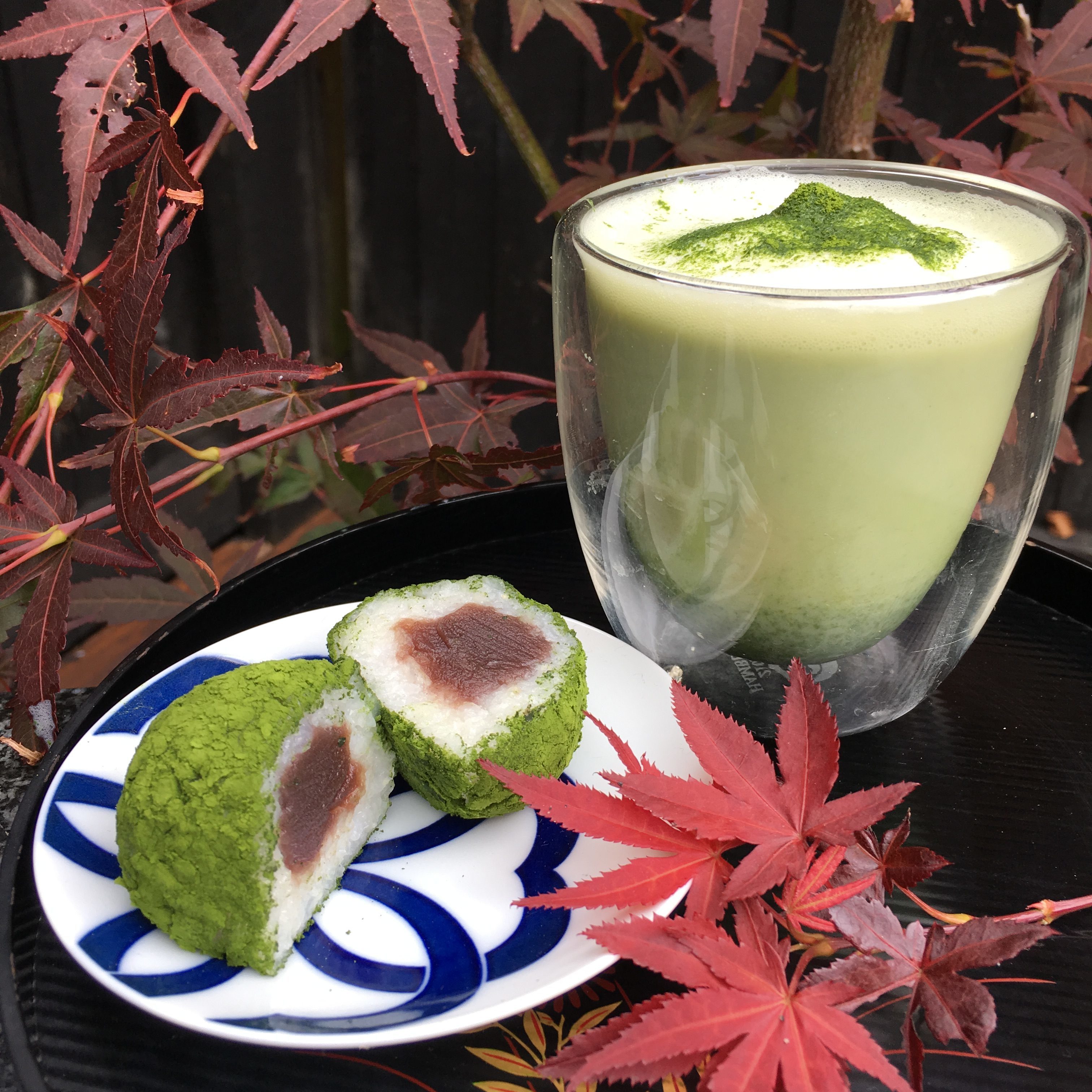 They make lovely gifts and are perfect with a green tea. 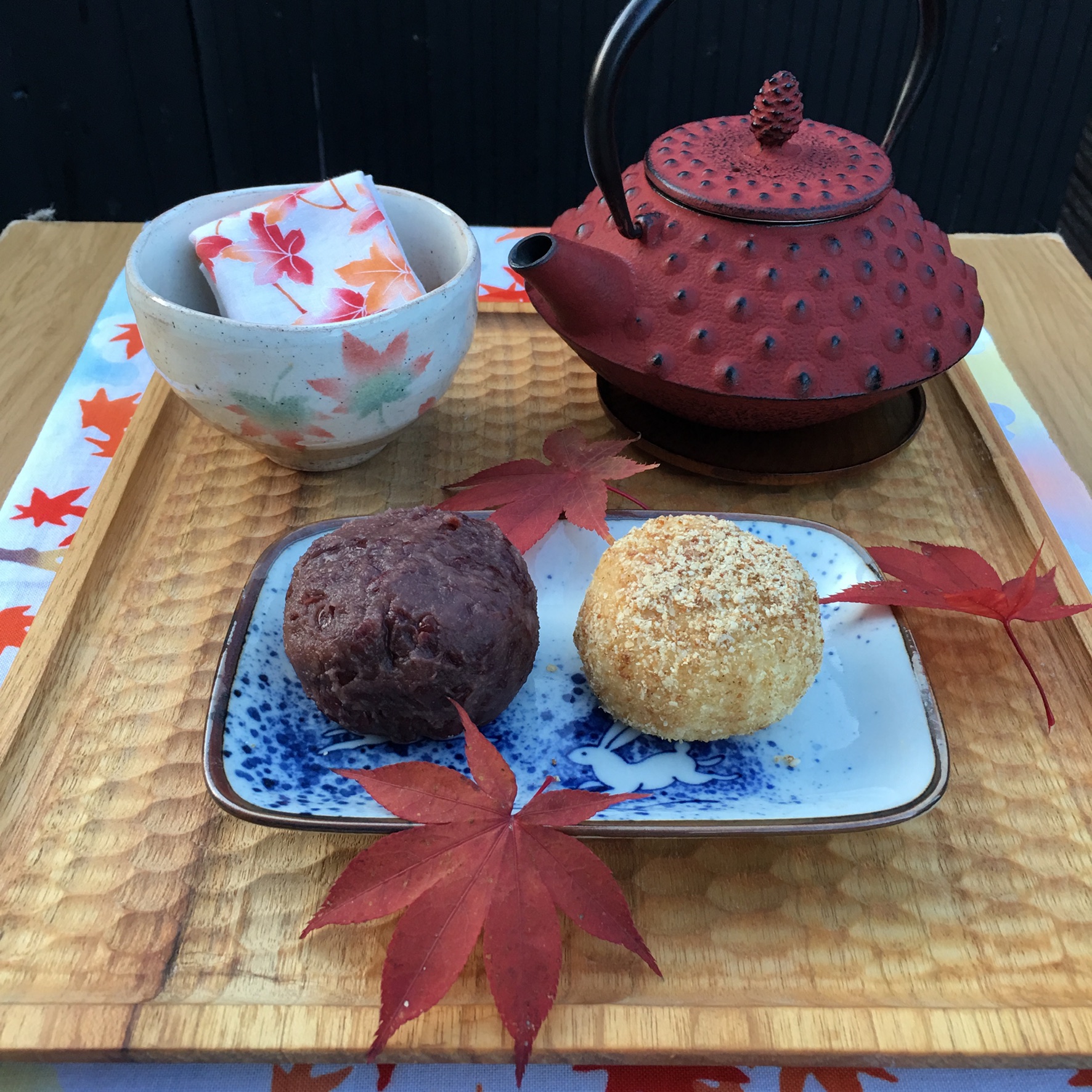 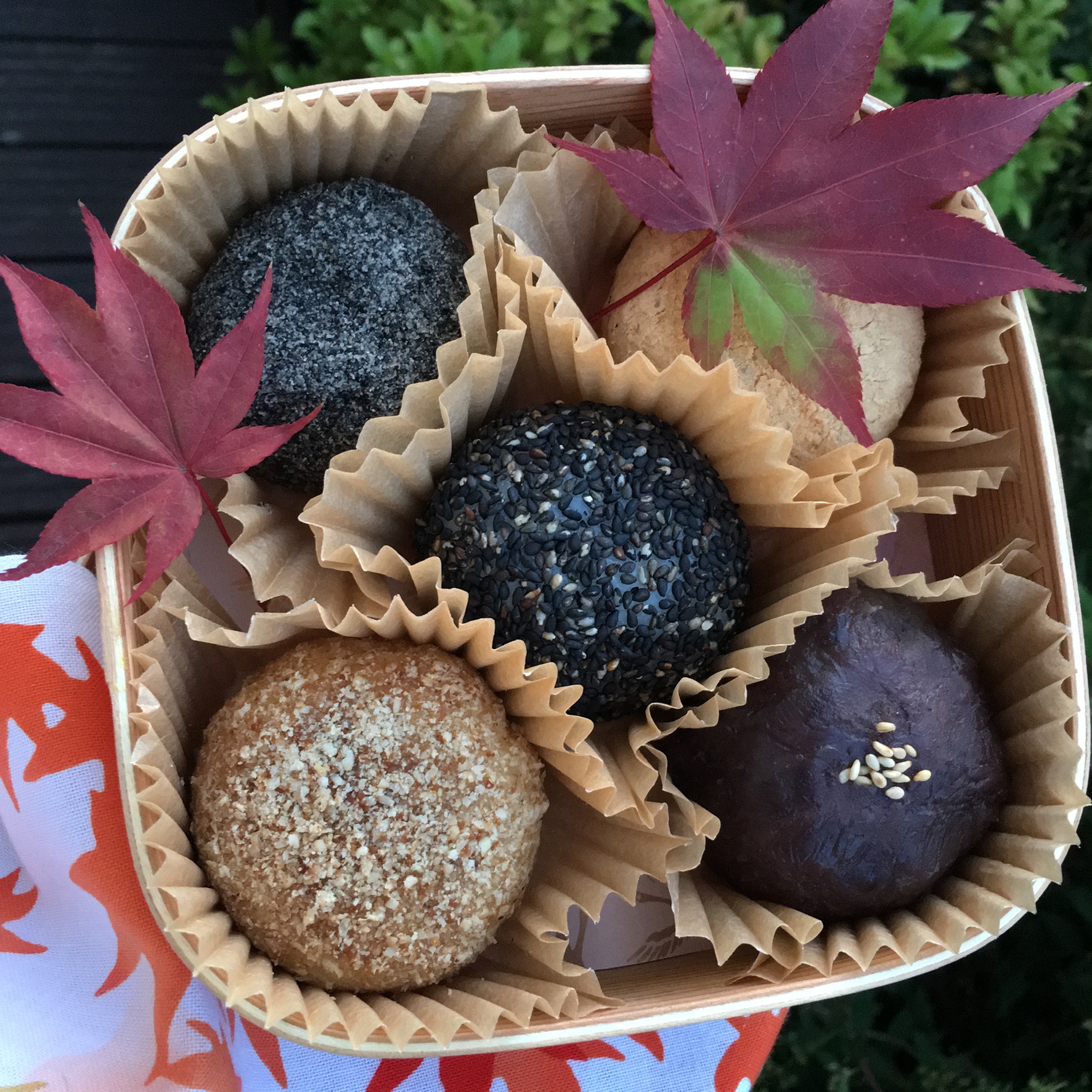 I know I will be making them to enjoy with a tea while looking out onto my already changing colours of maples in my garden. In Japan they won’t be changing just yet people in Japan will have to wait until late October, November to do what’s called momijigari or autumn leaf hunting which is as much a custom as hanami flower viewing in the spring. 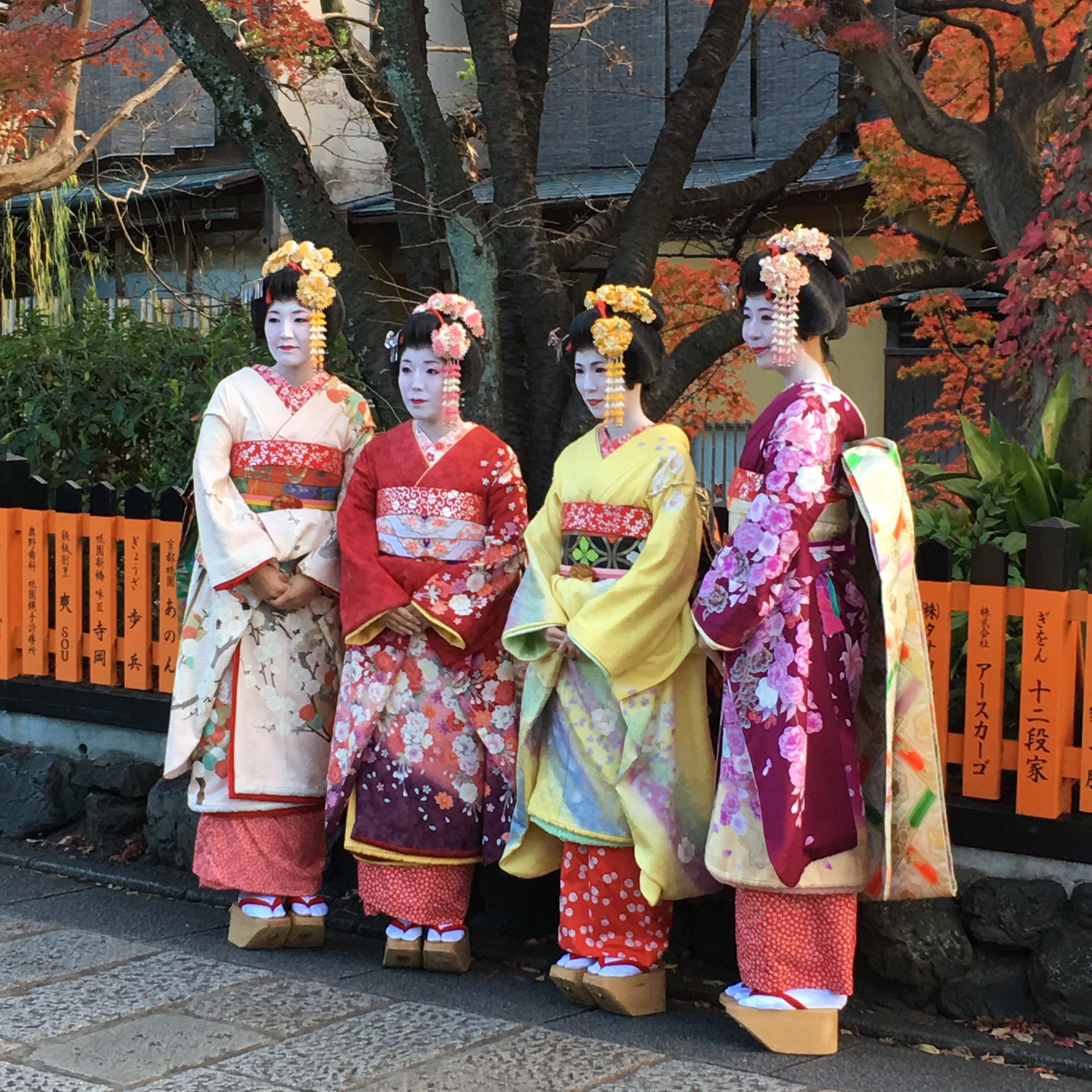 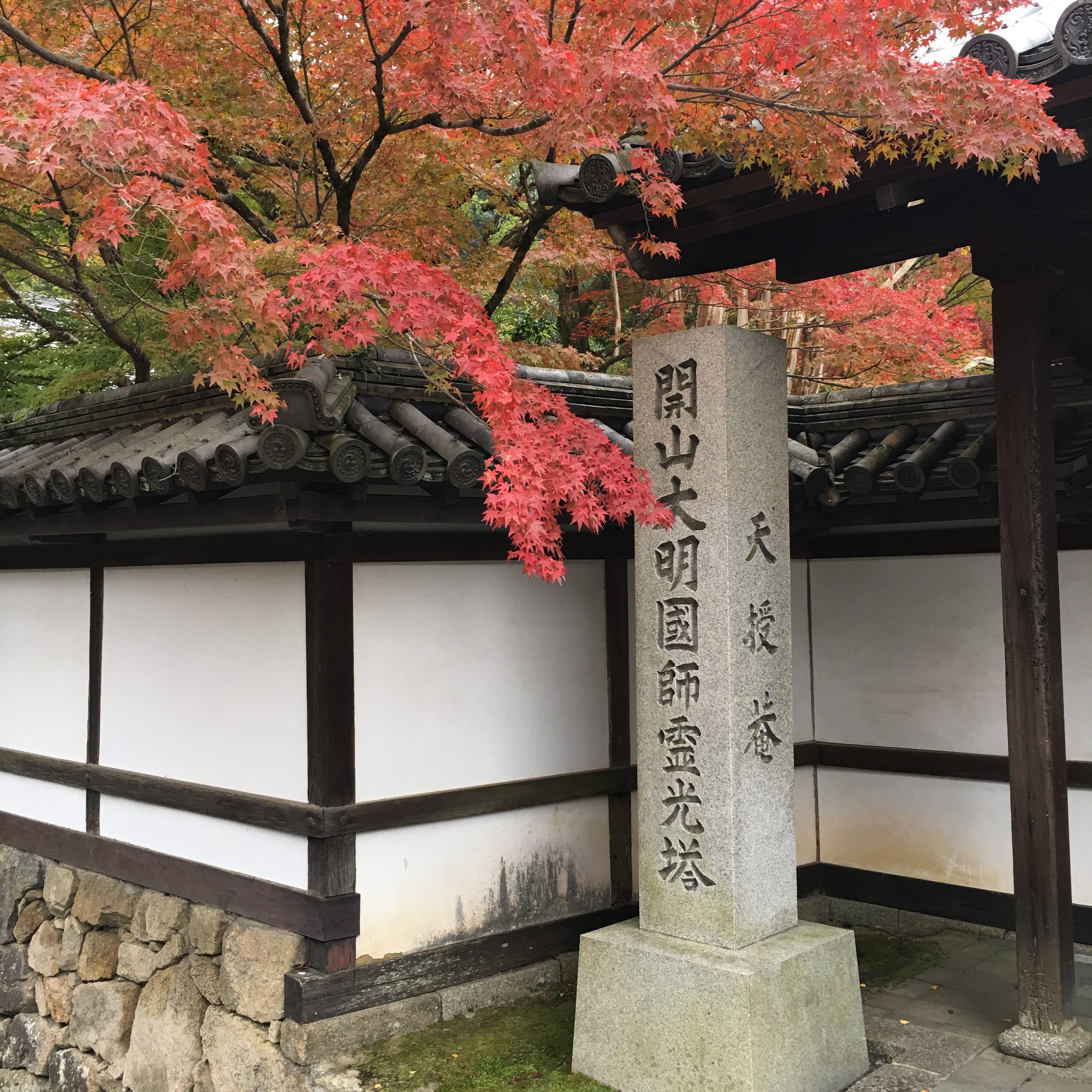 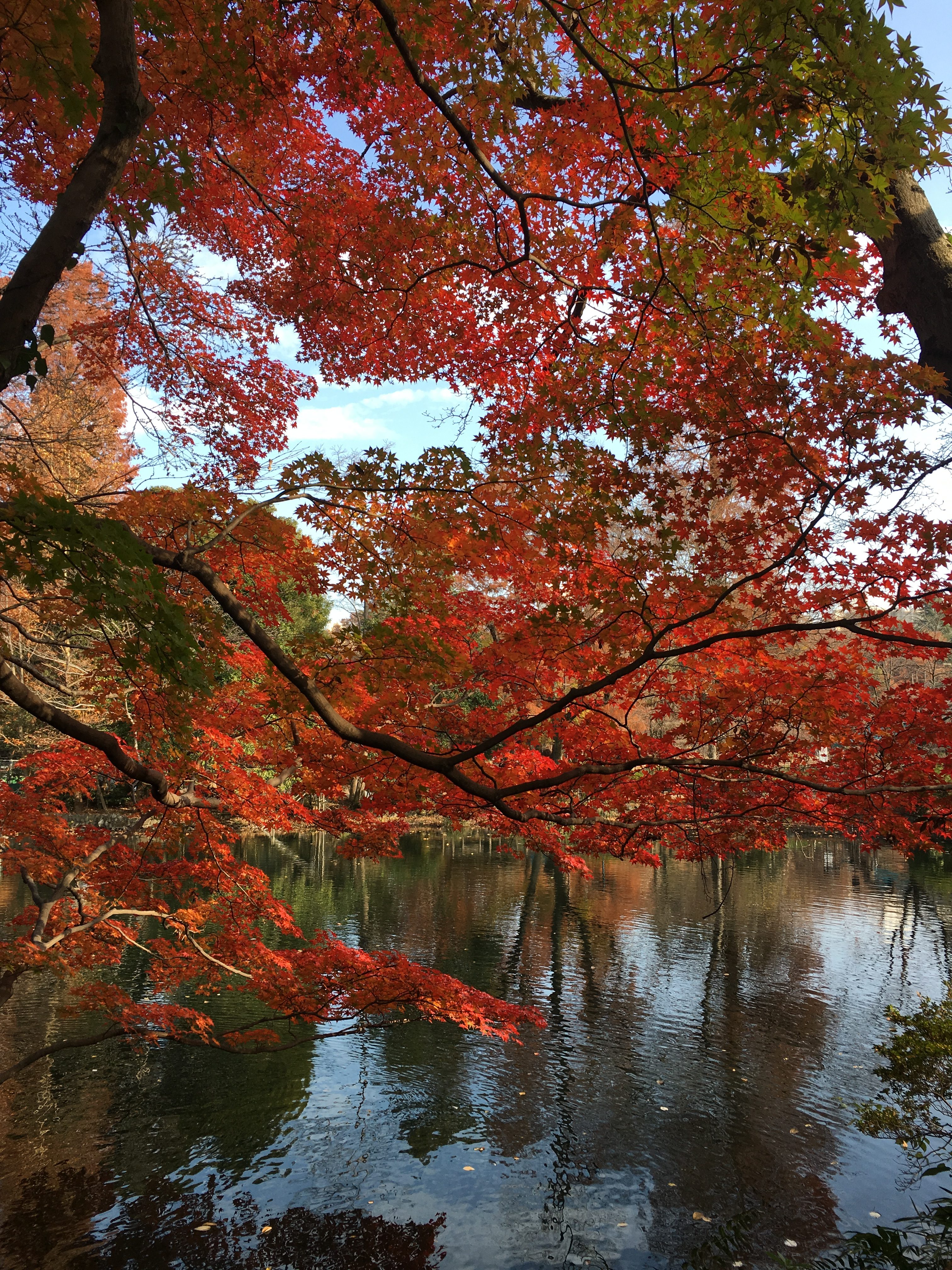 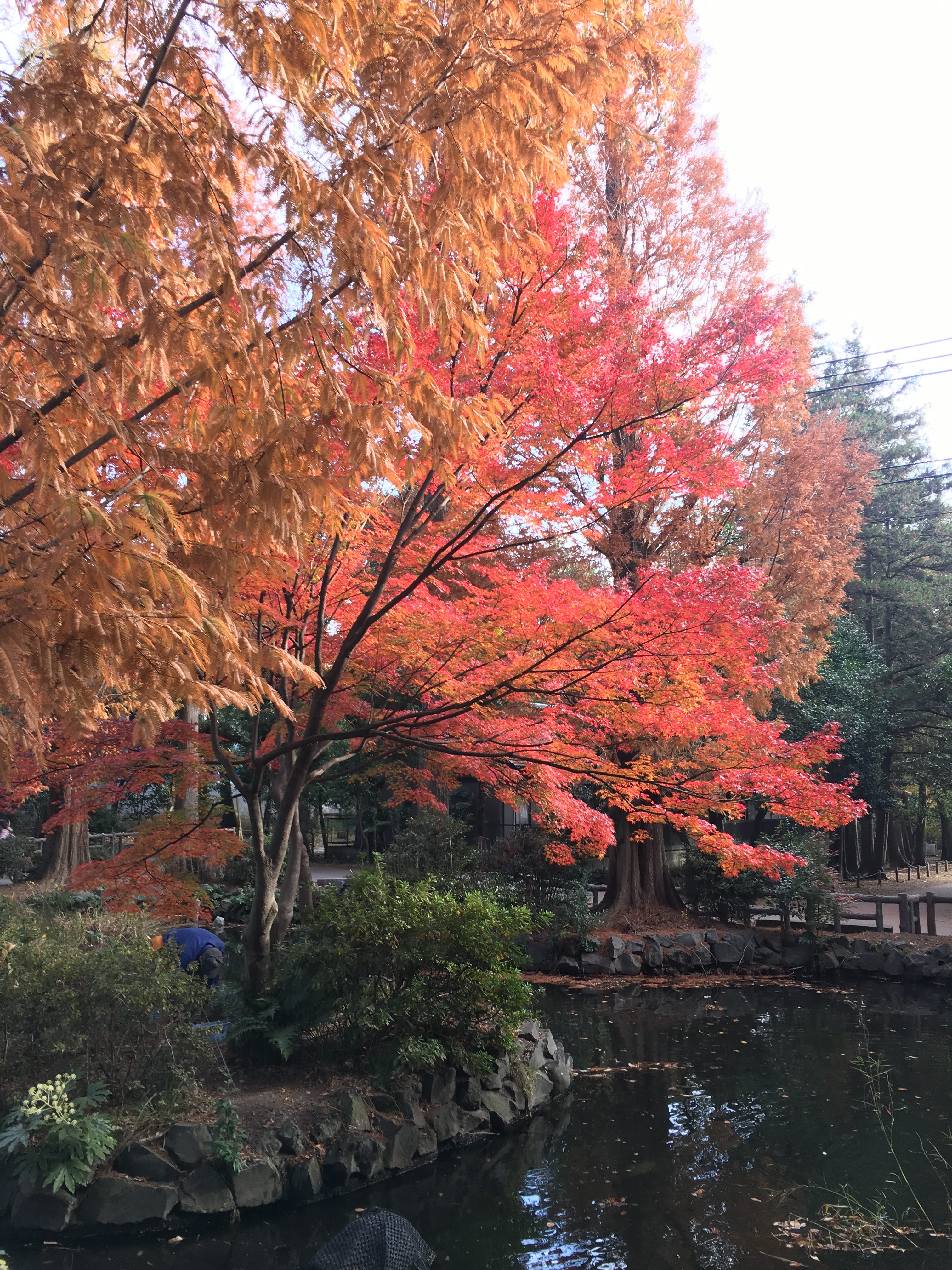 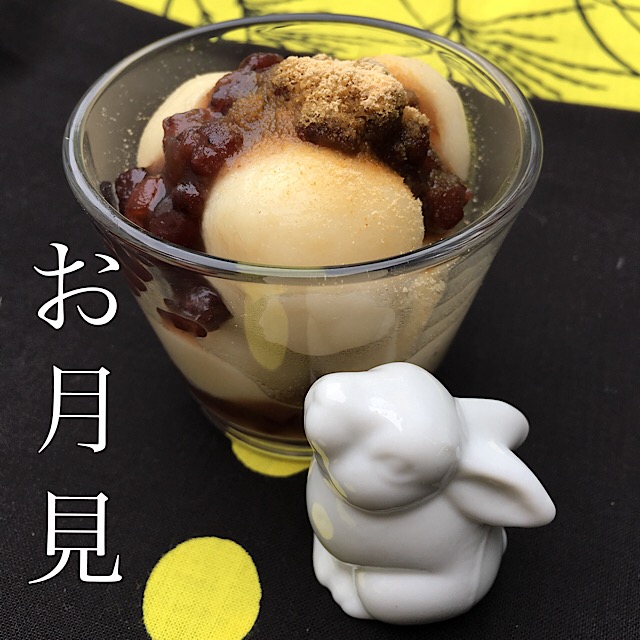 Tsukimi or otsukimi お月見 is the Japanese autumn moon viewing festival . The moons round shape is the symbol for fertility and at this time people pray for a good harvest. The date varies each year 2018  will be on September 24th. Japanese people display pampas grass known as susuki in their homes as a symbol of good luck and  make Tsukimi dango, rice-flour dumplings, because it looks similar to a full moon. After offering them to the moon, Japanese people eat the Tsukimi dango in order to obtain good health and happiness. Other foods which are associated with Tsukimi include chestnuts, known as “kuri” in Japanese, and taro, known as “sato imo”, in Japanese, as well as kabocha (Japanese pumpkin) and persimmons ( kaki ).

You will often see the rabbit depicted at this time as Japanese people see a rabbit in the moon pounding Mochi rice not a man in the moon.

Why not celebrate the autumn moon festival and make some dango search mitarashi dango. 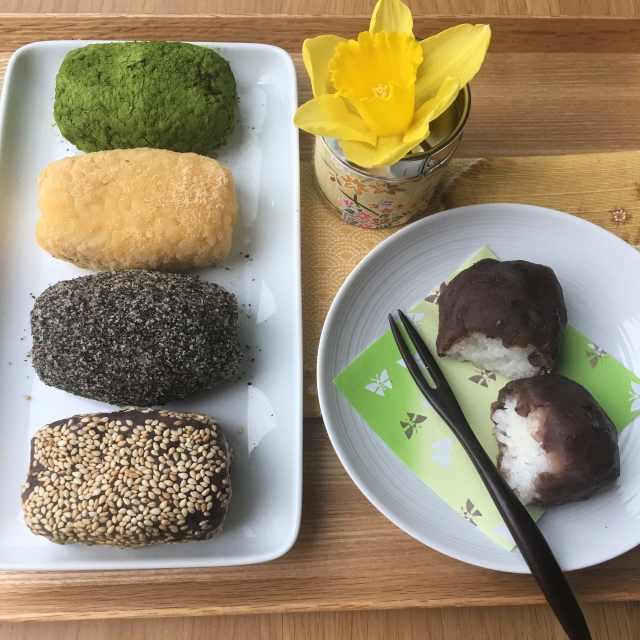 The bi-annual days of the vernal equinox are nearly upon us. In Japan it is a Buddhist festival known as higan. In the spring it is known as haru no higan . To celebrate I made Botamochi. This is a traditional confectionery made of sweet mochi rice pounded and shaped with a red bean centre . It is traditional to take these with flowers and incense to the graves of ancestors at this time. In the spring the sweets are called Botamochi named after the tree peony botan . In the fall the same sweets are called ohagi named after the clover bush hagi. I covered mine with different toppings matcha,kinako and black sesame . I also made a reverse one with the rice on the inside . Spring is nearly here . ぼたもち (牡丹餅) (おはぎ) 私は春分点のために作った ほぼ春です!

This is how to make your very own ( it takes a little time but is well worth the effort !)

then pound your rice I use the end of a rolling pin until some it’s mashed but still has some grain don’t over pound or it will be to sticky mix it as your pounding in between with your rice paddle so it’s even.

take about 70g of rice if your having rice on the outside and make balls of these in plastic wrap . Flatten each one spreading it out. Measure out balls of bean paste 30g and place in the middle of each flattened out ball ( mould  the rice around the bean paste .

when they are all done roll them in your chosen topping .

I like to then wrap each one in plastic wrap and freeze them and defrost over night ( great for a bento dessert ) . 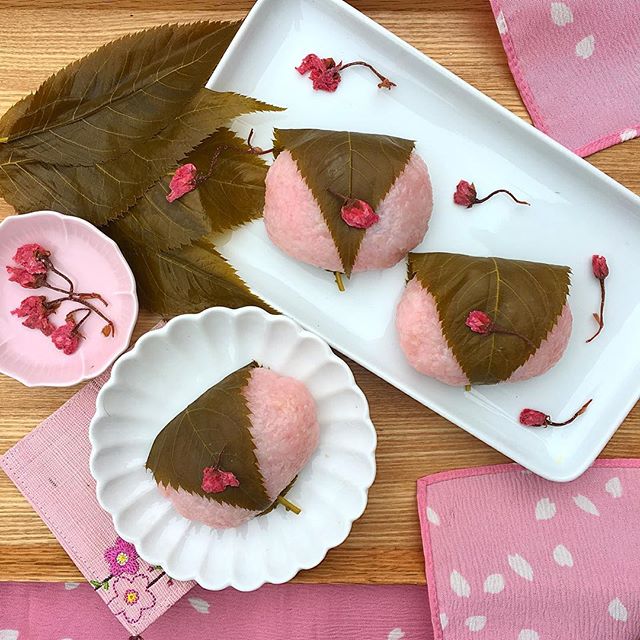 It’s Hanami season !
In Japan it is traditional at this time to make Sakura mochi .
Sweet sticky mochi rice with a bean paste filling wrapped In pickled Sakura leaves and topped with a Sakura flower .
The last ones I made I had to make some marzipan leaves as I didn’t have the pickled Sakura ones but I was lucky enough to be sent some by my good friend @violet_1223 so I decided to make some more .
自家製さくら餅 ??? 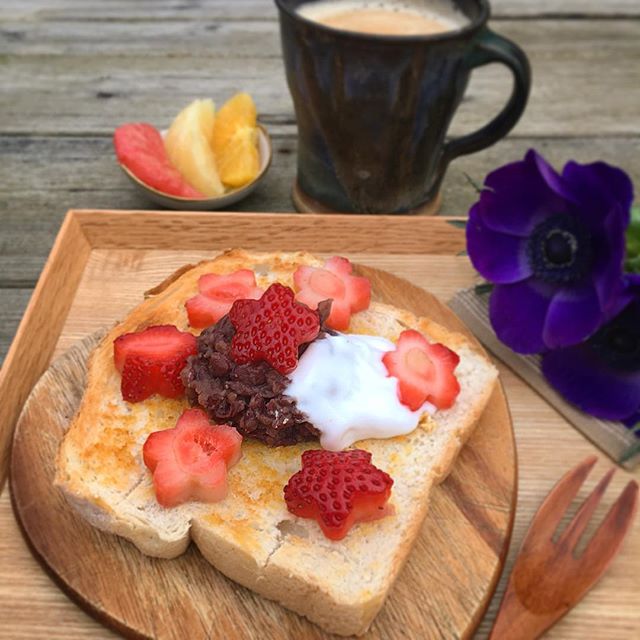 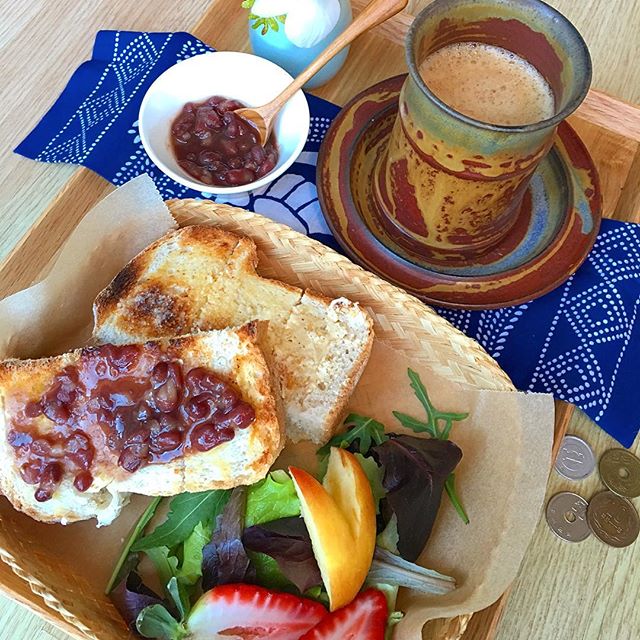 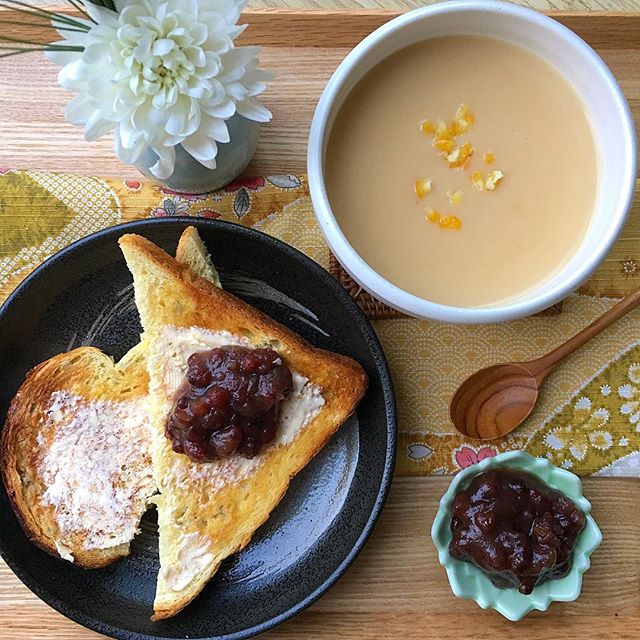 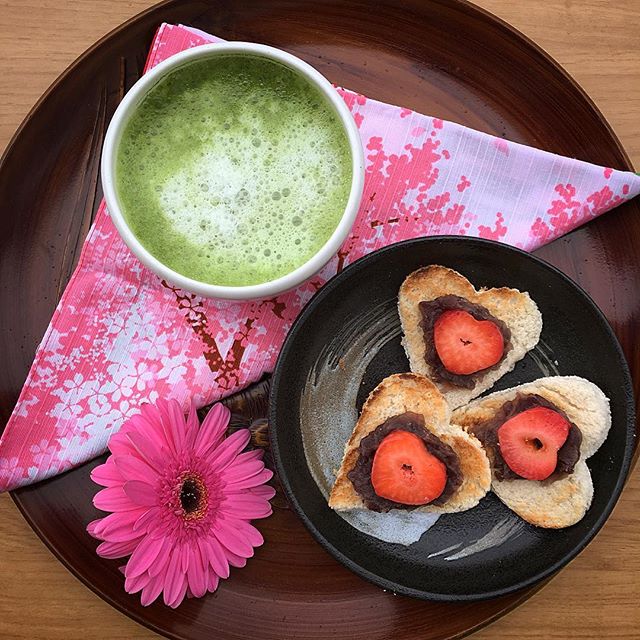 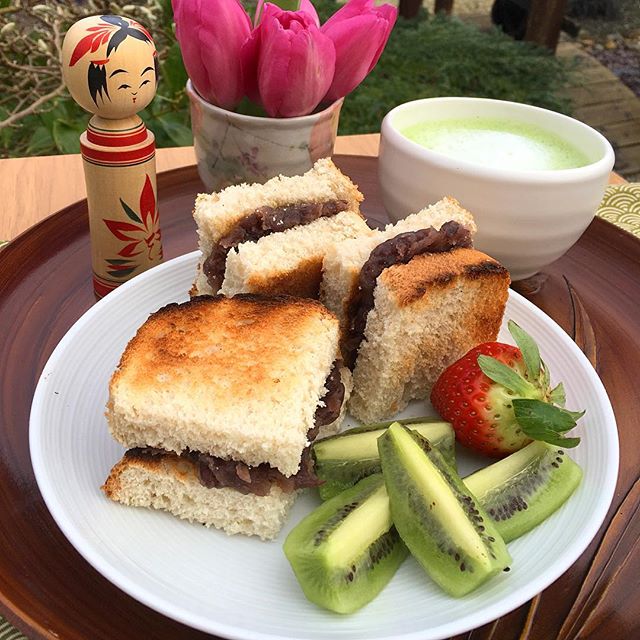 Good morning
Ogura toast with home made anko,coconut yogurt ( instead of the normal cream) and strawberry flowers . A latte and some grapefruit and orange segments on the side .
Nagoya specialty dish with warm toasted bread, topped with red bean paste is my Japanese-theme breakfast to day.
Have a wonderful day everyone.
Ogura Toast 小倉トースト
自家製のあんこ、イチゴ、ココナッツヨーグルト 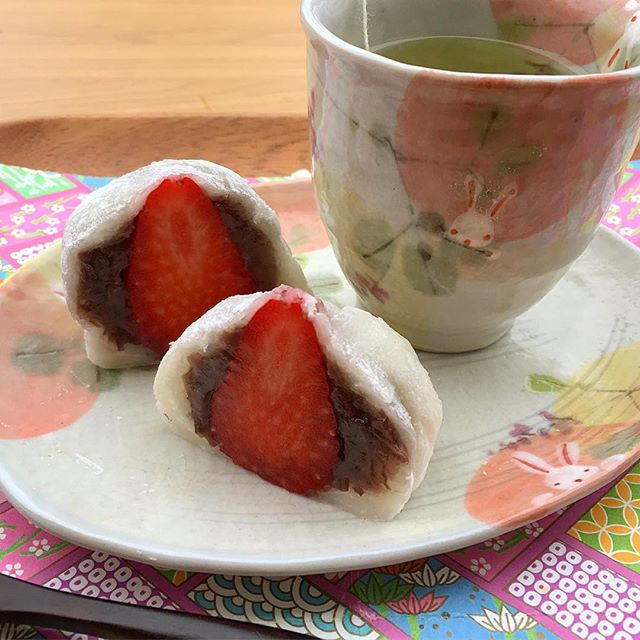 I made soft ichigo daifuku Strawberry Daifuku (Strawberry Mochi) いちご大福 Daifuku is a traditional Japanese wagashi . This one is mochi with anko (sweet red bean paste) and strawberry filling. There are many varieties of Daifuku, but it’s the same soft mochi with different fillings . During the spring time, Japanese confectionery shops sells a seasonal daifuku. This one always reminds me of the Sakura season I spent in Kyoto and visiting the beautiful shrines and temples. I’m not very experienced at making these but they taste delicious with a delicate green tea.  Daifuku actually means ( great luck) so wishing you all luck in your life.

To make these delicious treats you will need

Then mix flour and water in your bowl and add the sugar and mix well.

cover the bowl with plastic wrap and microwave for 2 mins

cover and microwave again for a further one min .

cover your service in potato starch and your hands

knead potato starch to make your mochi keep adding potato starch I like to keep a bowl to hand with some in ready . Then when it’s nice and stretchy make three balls .

Then flatten each ball and mould  the mochi around your already read bean paste covered strawberries .

slice with a sharp knife and enjoy like this one with a green tea. 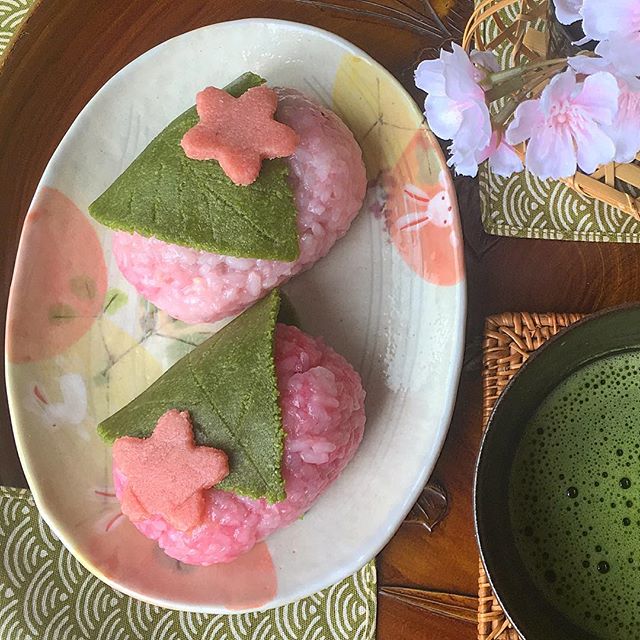 It is almost Hina-matsuri in Japan .
On March the 3rd it is the girls day festival in Japan .
One of the traditional foods to eat is Sakura mochi . Mochi rice cakes filled with red bean paste and wrapped in a pickled cherry leaf.
Unfortunately I do not have pickled cherry leaves so I made the Sakura mochi Kansai style with sweet mochi rice filled it with lovely sweet Tsubu-an (chunky bean paste) and then made matcha marzipan cherry leaves . To make the pink rice I just used a little beet juice .
They turned out really good lovely to have with a matcha tea.
私はさくら餅を作った.
私はチェリーリーフを持っていなかったので即興しなければならなかった.
???