A Japan Inspired Day Out In London

If you followed me on my stories on Instagram on Monday the 25th of June you may of seen my visit to London with a Japanese theme for the day. I also thought I would put my day on here so even though the Hokusai exhibition may have finished  when you read this if you are visiting London you may find some of the other places I went to of interest. 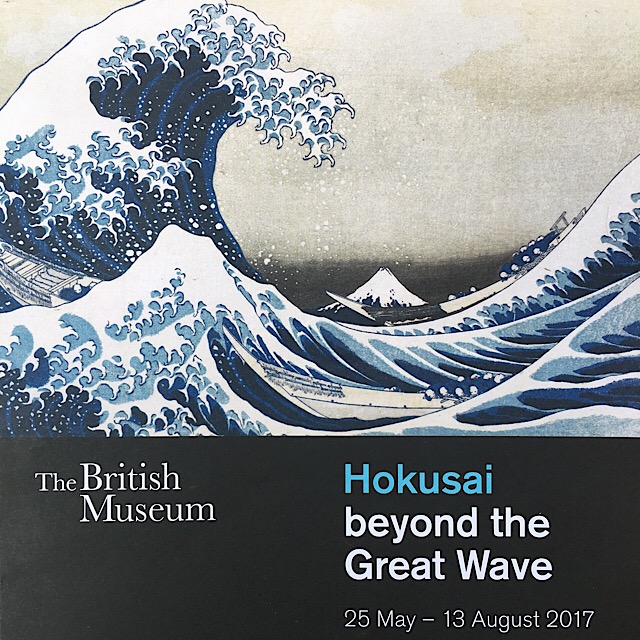 The Hokusai exhibition runs from 25th of May 2017-13th of August at the British museum at Holborn and is £12 each to enter. 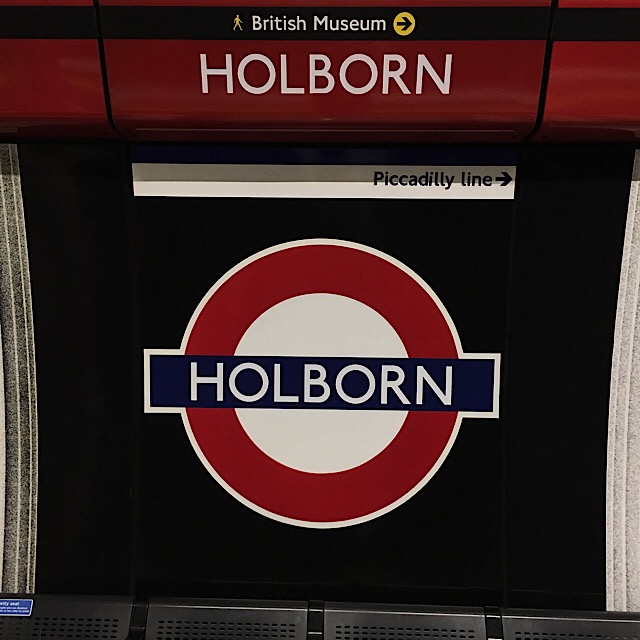 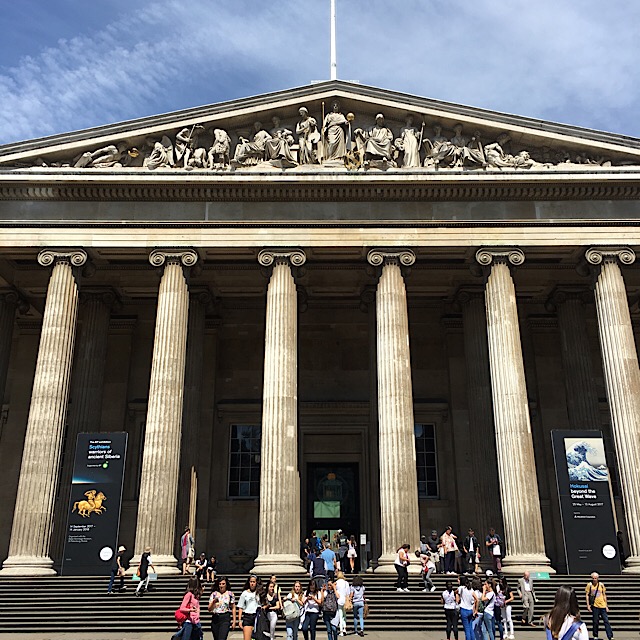 I really recommend visiting the Japan section here as it has some Hokusai paintings along with other beautiful Japanese art. In fact I could of stayed here a lot longer but I had to get off to my visit of the actual exhibition. 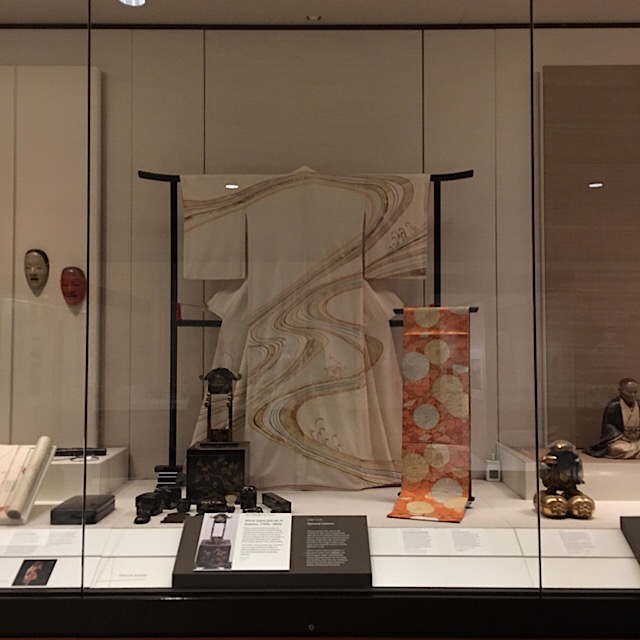 Well worth a visit the paintings are absolutely beautiful but it was very crowded making it difficult to view the paintings properly. I’m still however glad I went not only to see the famous Under the Wave painting but lots of his others like the Red Fuji colour wood block print part of the 36 views of Mt Fuji . 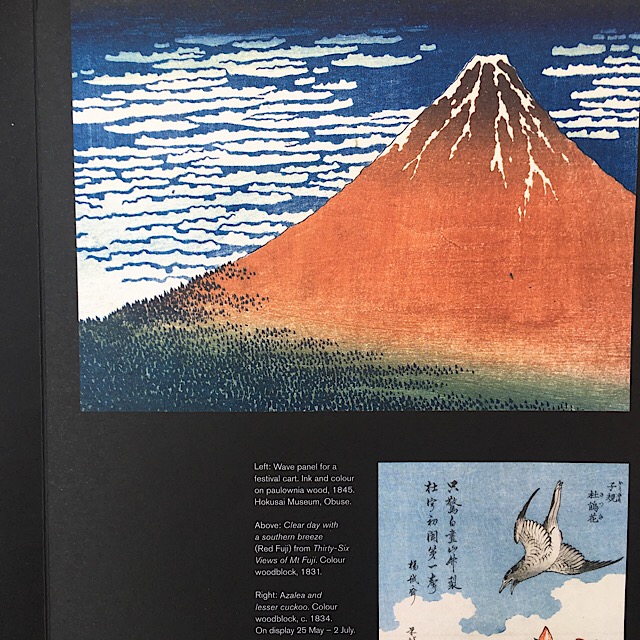 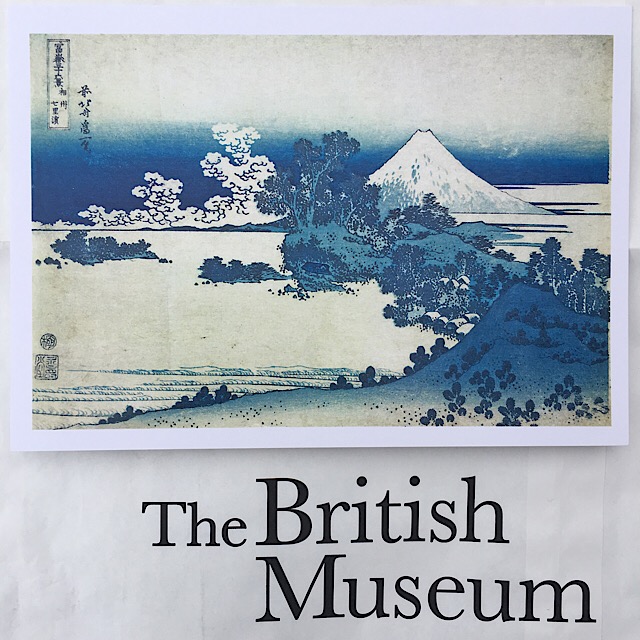 I would recommend booking on line as when I got there I was given a time slot. I actually decided on a later time slot so I was able to do more things and go back later .

So my next stop was Holborn to Piccadilly Circus to visit JP Books a good place if you like Japanese books magazines and manga . It also sells some lovely Japanese giftware. 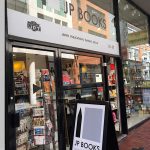 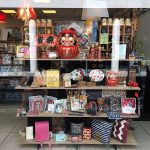 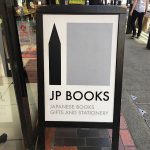 Round the corner from here at the moment is the Japan Centre though they will be moving later on in 2017 so when they do I will be doing a review of there new store. 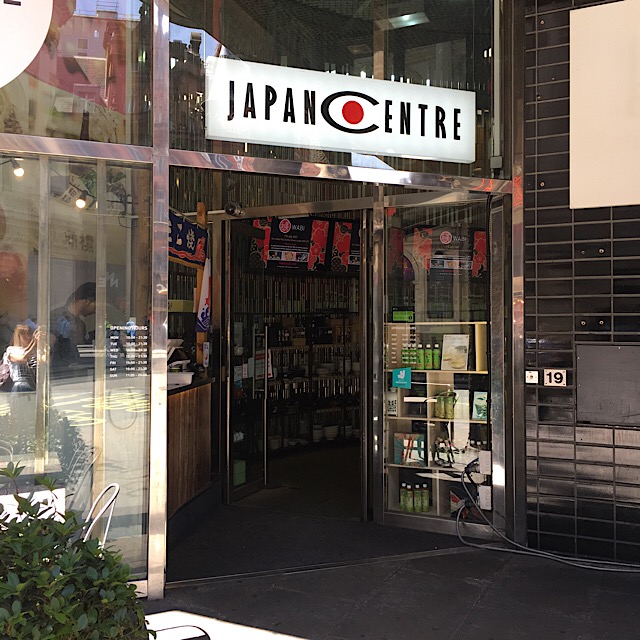 The Japan centre is a great place for me to pick up lots of ingredients for my recipes . I like to pick up fresh Japanese vegetables as they do not sell these on line. When I can’t get there I buy from their on line store but it’s lovely to go in and get new ideas for ingredients in recipes I want to try. They also have a small gifts section and magazine section,takeway foods and food counter along with a place where you can sit and eat but it’s not ideal as it’s in the super market but I think this will all change with the new store where they plan to have a proper restaurant. 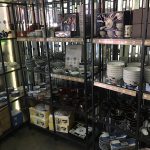 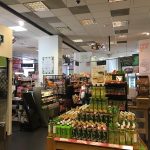 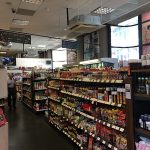 Next stop was the Japanese wagashi shop Minamoto Kitchoan they have a store at Piccadilly and have now opened a new one on the strand . Selling beautiful Japanese sweets . Quite a few a vegan you just need to read the labels but I always manage to find something. I love going in there it transports me back to sweet shops in Japan. I even like to speak Japanese when I go in there to the sales staff. 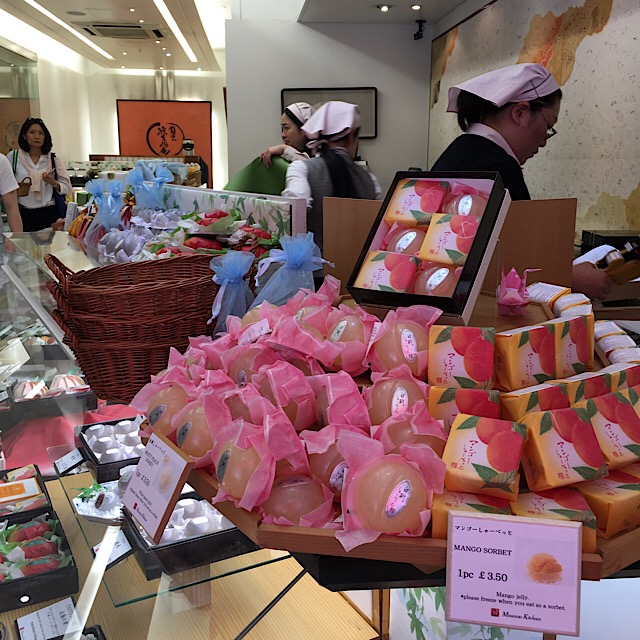 After this it was definitely lunch time so we headed of to the Japanese vegan restaurant Itadakizen near Kings Cross station. 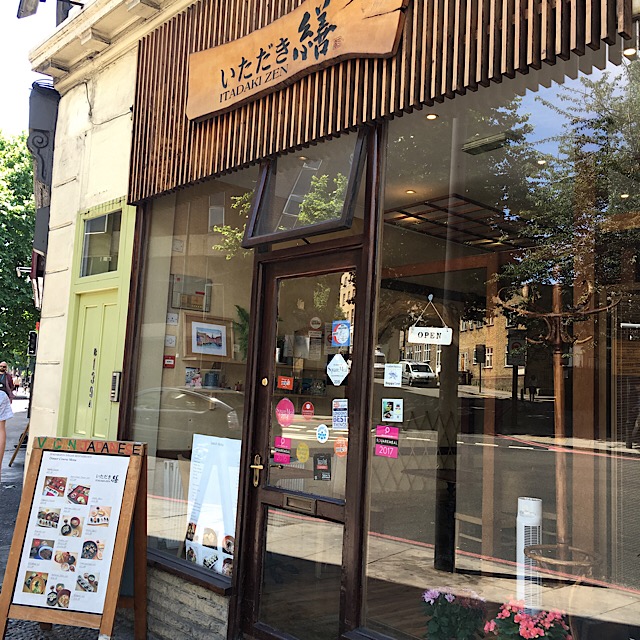 I had a set lunch bento which came with a miso soup. I thought we would go there to keep in with the Japanese theme day. 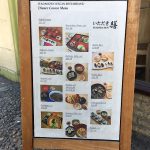 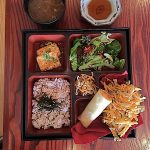 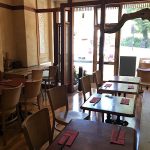 Then after lunch it was back to the British Museum for the Hokusai exhibition. 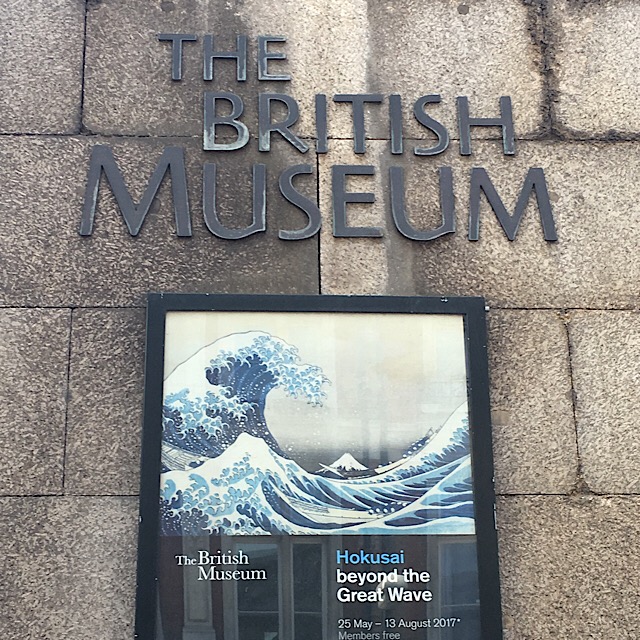 Finally finishing our day just near Angel Station at a Japanese tea shop called Katsute. They also have a Japanese restaurant near by which I will have to try called Tenshi .  I mentioned to the owner about vegan meals and he said he was sure they could do things for a vegan diet. 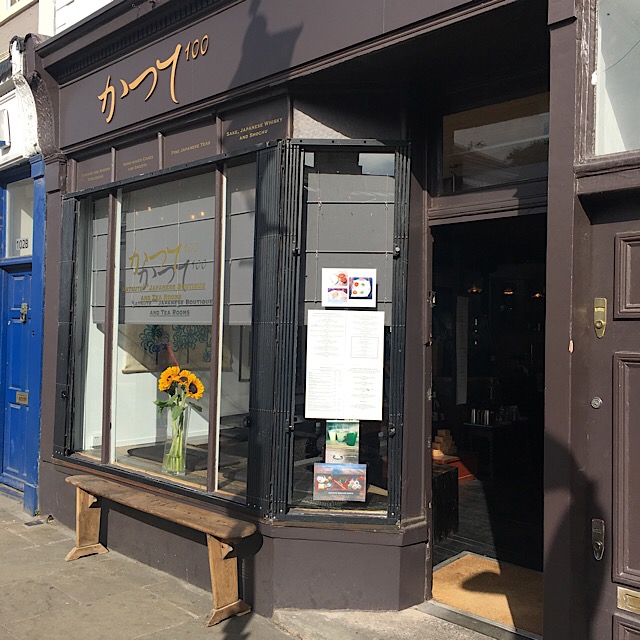 The tea shop is very antique looking with old dark wood and chandeliers . 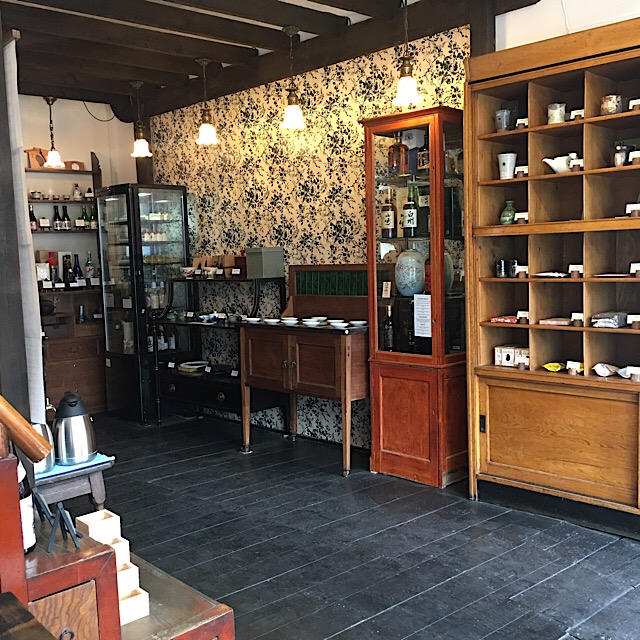 They sell a large range of teas and speciality cakes some of which are vegan . Like the yummy sweet potato cake I had . Two people had take outs of this cake while I was there and was pipped to the post on the last slice as I was going to take some home. 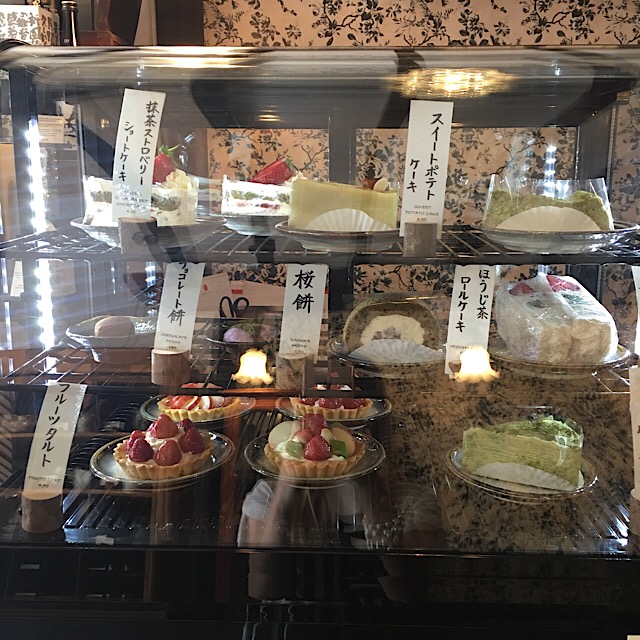 It was a hot day so I also had an iced hojicha soy latte. 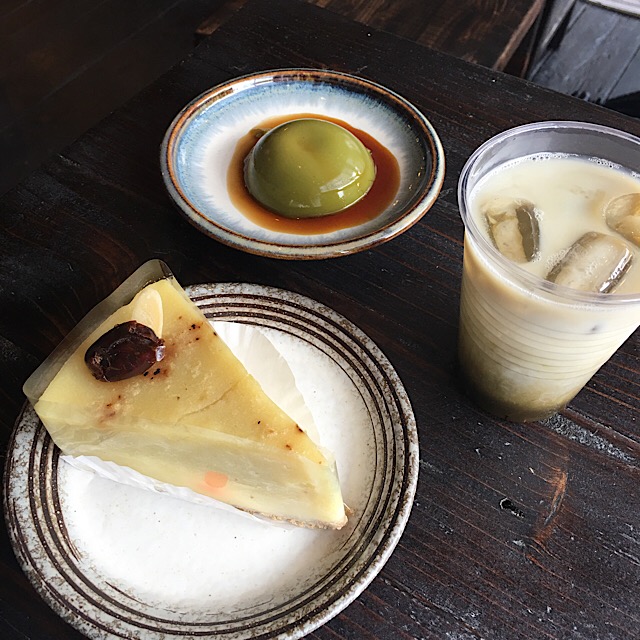 They also sell Japanese soft drinks and beers along with sake and plenty of ranges to take home if you wish along with beautiful tea bowls and cups. 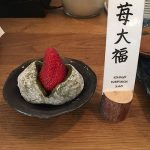 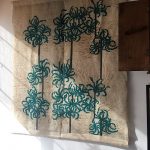 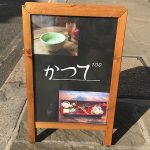 They also have a nice outside garden to sit in on nice weather. 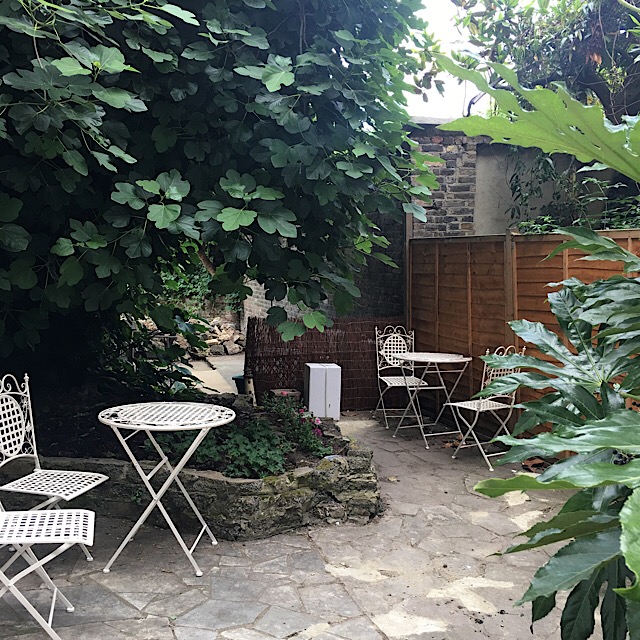 I would definitely recommend trying here.

There are a few other places you could check out like the gorgeous Japanese garden at Holland Park. 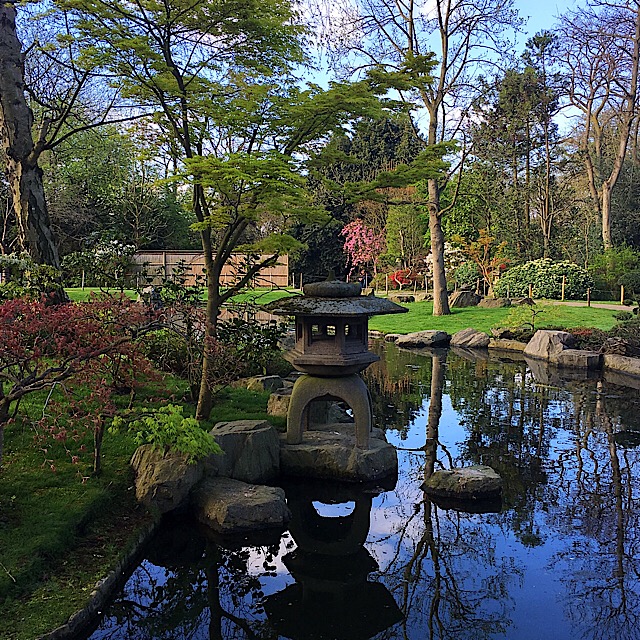 Wagumi a gorgeous Japanese gift shop/gallery (see my reviews) in the OXO Tower by the river Thames. 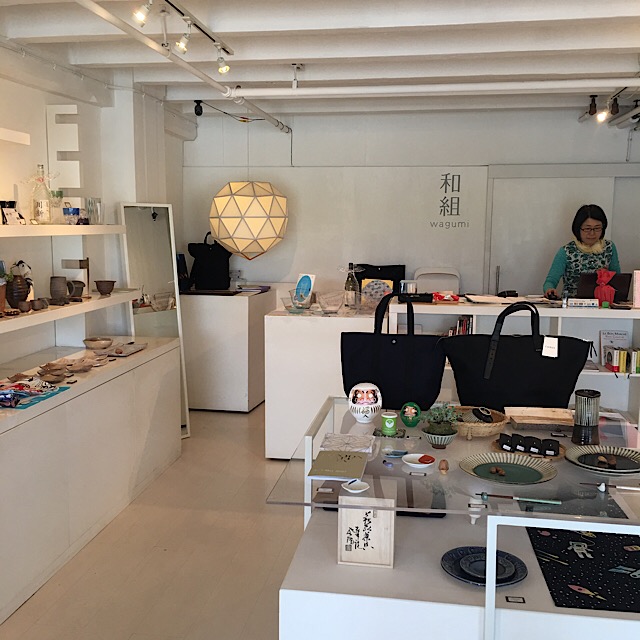 Also Butikku which often have pop up shops (check the links on my page to find out their next one or browse their website) They sell Japanese imported clothes,accessories and art. 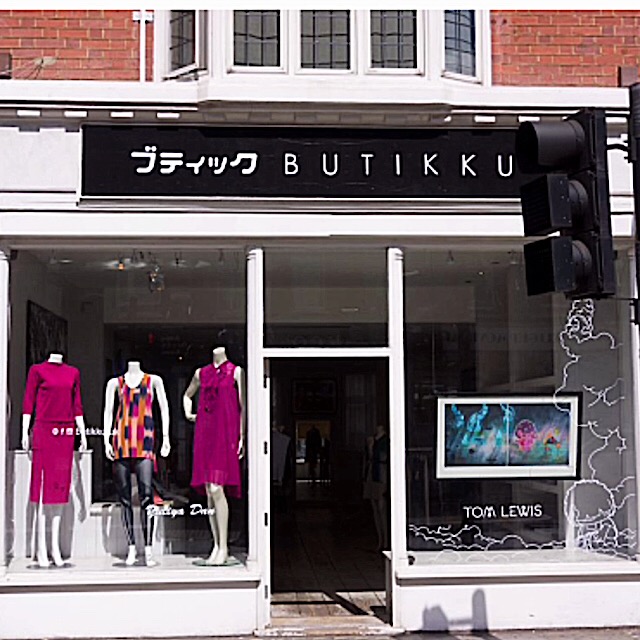 There are probably lots more places but these are the places I recommend. Let me know if you visit any.